Whereas Christianity has allowed for the devil to have power and authority in and of himself, the satan only has power granted by God, and has no authority in and of himself"
I remember the whisperings in college when it was suggested that a member of staff did not believe in the person hood of devil. I remember as cadets feeling part of a crusade to correct their erroneous thinking!! I smiled inwardly the other day when a cadet asked me if I believed in The Devil! Of course it might be interesting to work through what Jewish mind in 1 CE Palestine might have made of that question. No doubt Eleanor will help here (not that she is that old of course! :o).

What Jews Believe... is a helpful website and resource and I was interested to read that Jews believe in The Satan, and not in the devil (here); that rather than simply a variance in terminology, the the terms are not synonymous, in other words there is a difference between The Satan and the devil.

"For Jews, anything that even remotely conflicts with the idea that God is One and Indivisible will be rejected because it precludes true, pure, monotheism. The idea that there is a God in heaven above who fights against a god of the underworld, or hell, is not monotheism, however, it is the same duality found in other pagan faiths. The Bible speaks of a character known as The Satan, who acts like a prosecuting attorney, or a district attorney, in God's court. However, The Satan has no power or authority in and of himself, rather he must get permission from the Judge, God, to do anything. "

The concept and acknowledgement of "the satan." is well versed in scripture and occurs as "HaSaTaN," which means "THE satan", Seemingly the concept of the satan is not the same as the idea of the Devil. 'Whereas Christianity has allowed for the devil to have power and authority in and of himself, the satan only has power granted by God, and has no authority in and of himself'. For the devil, or satan, to have power and authority is to have more than one god, and brings in, what could be, a duality akin to Greek (Zeus/Hades) and Roman (Jupiter/Pluto) thinking. So would the Jewish mind in 1 CE Palestine adhere to the idea of a God in heaven in battle against a god of the underworld? Probably not, in that it 'precludes true, pure, monotheism'.

This runs contrary to those who would dismiss and look down on anyone who would not adhere to a person hood of the devil. NT Wright gets around this, I think, by suggesting that it is wrong to think of the satan as “personal” in the same way that God or Jesus is “personal,” he uses the concept of “subpersonal” in order to refuse the full dignity of person hood and thereby avoids any duality problem.

Perhaps the better question is do you believe in the devil or the satan?
Posted by Gordon at 7:56 AM 4 comments:

Holiday part 2 took the form of a week in the Peak District/ Yorkshire following the wedding.

The views from the cottage were stunning and it was good to get to know another part of the UK. Castleton was a definite must return, can't say that I'll be running to go down pit again though. Having said that the National Mining Museum was fabulously free - I have utter respect for those who worked down there. 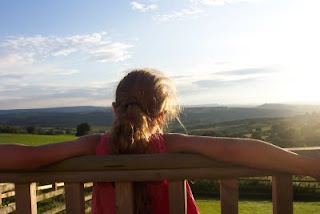 Yorkshire Sculpture Park was well worth the £4 parking fee.

The drive through Snake Pass was breath taking - seeing people cycling it all puts my 6 miler to Faith House into a new perspective!

Welcome to the latest Mrs Cotterill... 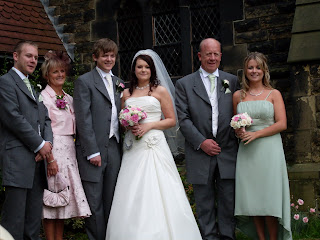 It was great to spend time with family up in Yorkshire last week as Simon married Victoria. I'm still recovering from seeing my 83 year old mother dancing at the disco!

Honestly where does time go?
Posted by Gordon at 7:19 AM No comments: Not much mention of Monty this morning after the Ashes are regained!

Without Monty in Cardiff there would have been no celebrations today!

So cheers Monty!
Posted by Gordon at 7:18 AM No comments:

Mickey's smile faded as we talked, my voice became background noise as he slowly disappeared into his past.

The conversation had been good, sparked from a childhood memory, we had laughed as Mickey recalled his scrumping pedigree as an eleven year old. Belly laughs accompanied the various adventures of his exploits as he 'stole' fruit from neighbours fruit trees to order from his jam making grandmother.

"Oh yes...." in a voice betraying a certain melancholy.

It wasn't long before I regretted asking "So you have good memories of growing up then Mickey?"
"Not really ..." the smile now gone, "... they were mostly bad."

Later that evening Mickey showed me his plastic ankle jewelry, tagged for a crime he says was drink driving. As he left to electronically sign in to keep to his curfew, I thought of the Mickey's of this world whose fullness has been stolen by all that contributes to the brokenness of bad memories.

Right at the begining of the evening Estelle read me a quote about putting legs to our prayers, I've been reading Yancey's 'Prayer' and he says the same. I left Faith House thinking as I cycled home of the role of the Church in mission to be able to create new and wholesome memories in order to bring feet to those many prayers that ask 'your kingdom come'.
Posted by Gordon at 7:18 AM 2 comments:

Nouwen on Desires and Spiritual Disciplines...

Our desire for God is the desire that should guide all other desires. Otherwise our bodies, minds, hearts, and souls become one another's enemies and our inner lives become chaotic, leading us to despair and self-destruction."
Nouwen's daily email (subscribe to the email service here) a few months back focused thinking on the role of spiritual disciplines in the ordering of our desires.

"Desire is often talked about as something we ought to overcome. Still, being is desiring: our bodies, our minds, our hearts, and our souls are full of desires. Some are unruly, turbulent, and very distracting; some make us think deep thoughts and see great visions; some teach us how to love; and some keep us searching for God. Our desire for God is the desire that should guide all other desires. Otherwise our bodies, minds, hearts, and souls become one another's enemies and our inner lives become chaotic, leading us to despair and self-destruction.

Spiritual disciplines are not ways to eradicate all our desires but ways to order them so that they can serve one another and together serve God."

The ordering of our desires it seems to me is caught up in the realignment of self that spiritual disciplines bring, as we seek to understand what it is to exist in a space dominated by selflessness.
Posted by Gordon at 5:02 PM 1 comment: 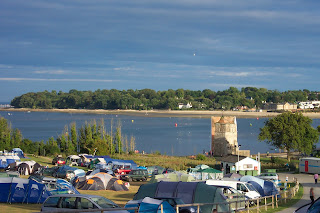 Just back from a great week on the Isle of Wight, camping at Nodes Point. The campsite was a two minute walk from the beach, a five minute walk from St. Helen's Duver and what d'you know we had good weather!

A visit to Quarr Abbey was as ever special, Cowes week, family barbecues on the beach; plenty of time to read and watch films on my ipod; walks with the girls and oddly lots of sun made the week great!

Next installation of the holiday to come in a weeks time when we go to a cottage in Yorkshire.
Posted by Gordon at 7:20 AM No comments: