Sat in 'The Eastern' our local Indian Take Out waiting for our Chicken Korma, Chicken Balti and pilau rice, (ok and poppodoms, chapati and a nan) I tried to work out my feelings as to being back after a good two week holiday.

I gazed out into the street through reversed flickering neon into the world that is home. I see the same faces of those that periodically wander into our church looking food - staggering and lurching up the street. I see an African family carrying their provisions for the night. I look at the bus queue and see every nationality waiting for the D6. As I gaze out into my world I talk cricket with the Bengali waiter I see three or four police cars 'blue lighting' through the dense traffic. Hours before we were camping in West Wight on the Isle of Wight - now we are back and I wonder what I feel.

The next day I am ploughing my way through emails and piles of washing when there is a knock at the door. I knew who it was before I opened the door. I'd heard him when he was way down the street.

I often wonder what our neighbours think when Patrick calls.

I open the door and before I can say hello Patrick "so a vicar and a nun are getting married.......what are you going to do about that one?"

Patrick is there beaming, outstretched in his hand a week-old paper he has saved from a bin in the market for me. He continues with some nonsense involving a wooden submarine and the Isle of Wight - "did you have a nice time...I'm glad you're back!"

He shakes my hand and he is gone chuckling his way down our street.

I feel welcomed back and I am glad to be back.
Posted by Gordon at 9:36 PM 7 comments:

“I’m sorry we won’t be needing the appointment – I’m afraid she didn’t make it”. The receptionist on the end replied with deep empathy...

“Dad” Bethan said in exasperation as I stated to cover the Ravel shoe box with the surrounding soil “you’ve forgotten the dust to dust bit”. I apologise as Bethan and Eryn complete Scruffy’s rite of passage. Two lolly sticks with Scruffy written in biro mark the spot.

We go and get an ice cream, which suffices as the wake. As we sit and talk about life and death and grief. Bethan looks up from her lemon sparkle. “What if we were wrong and she isn’t dead and we have buried her alive?” I think of how when I picked her up with her back leg stiff as a board – and with John Cleese in my mind “Beth there is no doubt that Guinea Pig was dead”

Strangely, Scruffy and Fluffy have given me a little to think about regarding the emerging church. (Emerging Guinea pigs; Pet day...) Even in death my mind went back to Bethan’s question “What if we were wrong and she isn’t dead and we have buried her alive?”

There is always something more attractive.....!

This year’s trip was good. People took the opportunity to invite friends, family members that we hadn’t met before. For some on the oldest 53 seater coach in East London the annual trip to the sea-side seems to be highlight of their year. I always feel guilty as I never seem that excited by the prospect. But this year the whole sense of church was really strong. The sense of community was really refreshing, uplifting.

As we sat huddled together sharing food and conversation in the rain we looked at other groups spaced out on the beach huddled together in that church outing kind of way. Two or three black churches and a Tamil church occupied the beach together while all other sensible people probably stayed at home. Once the rain stopped we had an amazing game of football. Heads turned. We were the centre of attention as people from the other groups watched. I thought it must have been out silky skills that drew their admiration and attention. Probably Brian a Nigerian was closer to the truth.

Beaming Brian enthusiastically points out “did you see that we were the only group that was not just black, that we are mixed? Did you notice that the other churches saw that as well?” Brian catches his breath from the game “Gordon I like that – I like it that we are mixed… it is the way it should be!”

Margate was great. Even the rain couldn’t spoil the sense of community that was ours. The only down point. Patrick got radio-active poisoning from the sand!

Back in our community lounge I sit having a cup of tea with Patrick. 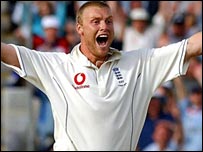 64.3 Harmison to Kasprowicz, OUT: short ball banged in, Kasprowicz tries to get out of the way but just cannot manage, the ball balloons up towards the keeper and Geraint Jones takes the catch.

Advantage out of Disadvantage

My involvement with Urban Escape finished with a trip to the theme park at Thorpe Park. A mini bus load of us hit the rides for the day.

Adam came for the first time this year. This year he is old enough. Adam suffers from Asperger Syndrome somewhat similar I think to autism. But because Adam is registered disabled he gets a special band on his arm, as do up to six people that are with him. That illuminous orange band gets you on the rides without waiting 3/4 hour. You walk to the front of the queue show your wrist and you are on.

So yesterday Adam's disadvantage was turned into advantage. Walking along watching Craig with his new mate Adam left me touched, and moved that Adam was brought in from the margins and placed centre stage. Thorpe Park made Adam worth knowing and Adam revelled in his new found status.

Well done Thorpe Park - The church could learn much.
Posted by Gordon at 4:07 PM 9 comments:

Forgetting to find yourself...

Mother Teresa suggests“by forgetting yourself you will find yourself”

"this touches one of the great mysteries of human existence and exposes the lie of Western materialism and self-preoccupation. In the west we have this idea that happiness is gained when we look after ourselves. The more we focus on ourselves, the better off we will be... but the gospel has a very different vision of life based on the self-giving of JC for our salvation, healing and renewal."

As long as I can remember Church conversations always seemed to be about self preening and grooming to create that perfect environment. Get the music right; get the preaching right; get all seeker sensitive; get purpose driven. More recently the emerging church seems equally pre-occupied with itself, get the ambience right, images right; video loops; dialogue. It all leaves me questioning more and more the marketing hype which seems to offer so much more than actual substance.

I wonder what a resulting church would look like that spent more time forgetting itself and all the trappings desired. I wonder what a church would look like that actually found itself? I guess if the church is going to get anywhere near being the transforming influence it has been called to be we need to learn the art of forgetting ourselves!
Posted by Gordon at 9:49 PM 3 comments:

Fooling no-one but yourself...

I've just got back from seeing James. He is back in side St Clements - a secure psychiatric unit. I've been to see James before in this unit (here). James rocks back and forward as he tells me the tale of a knife and six police officers, his memory of saturday night seems blurred.

As he tells me stories of over dose, stories of being rejected by his mother, stories of being in care and running away to London, I'm acutely concious of another members of the ward. Up one side of the corridor and back - same pattern as last time but different person. I try not watch as he eats his way through a jar of chocolate drinking powder, I try not notice as he coughs clouds of cocoa into the air, I try not notice the deep glottal 'urgh' everytime he passes me. I try not to watch the 50-60 year old pirouetting like a 5 year old on a mission to get dizzy. I try not to watch a young girl screaming I feel suicidal I need a nurse... "Don't we all" James mutters.

"The problem is..." James starts "no-one really knows what it is like...no-one!"

I figure 80% of the time in ministry you feel, pretty much inadequate. 20% of the time you are fooling no-one but yourself!
Posted by Gordon at 7:49 PM 3 comments: