"I came out of seminary in 1970 thinking that my job was to have an answer for every question. What I've learned since then is that not-knowing and often not even needing to know is a deeper way of knowing and a deeper form of compassion. Maybe that is why Jesus praised faith even more than love; maybe that is why Saint John of the Cross called faith "luminous darkness." Richard Rohr
The highlights from his thoughts this week...

The goal of the dark night of the soul is to draw the self beyond ego into full transfiguration and union in God. (Sunday)

The gift of darkness draws you to know God’s presence beyond what thought, imagination, or sensory feeling can comprehend. (Monday)

“The only action left to the soul, ultimately, is to put down its self-importance and cultivate a simple loving attention toward the Beloved.” –Mirabai Starr (Tuesday)

God needs to catch us by surprise because our very limited preexisting notions keep us and our understanding of God small. (Wednesday)

Without the inner discipline of faith (“positive holding instead of projecting”) most lives end in negativity, blaming others, or deep cynicism. (Thursday)

“You called, you shouted, you broke through my deafness, you flared, blazed, and banished my blindness, you lavished your fragrance, and I gasped.” —St. Augustine (Friday)

"The only people who pray well are those who keep praying. In the dark night, when all other practices and beliefs about God lose their meaning, keep returning to silent, contemplative prayer. It will keep you empty and ready for God’s ongoing revelation of an ever deeper love."

Healthy Church #3 seeks to find out what God wants

Ongoing reflections on Warren, R (2004) The Healthy Churches' Handbook and its 7 marks of health
The third mark of health that Robert Warren looks at is that of seeking to find out what God wants, what he calls a 'discerning the Spirit's leading'. This is all about having a sharpness of focus as a church, a seriousness of purpose carried forward by a sense of vocation. 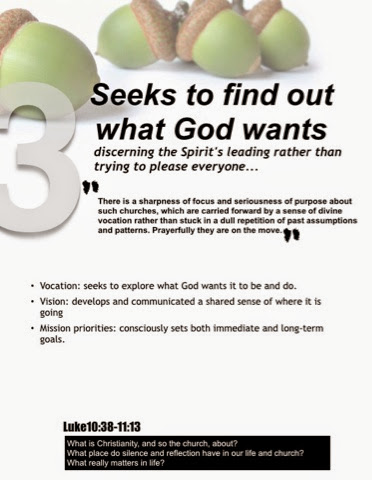 Posted by Gordon at 12:59 PM No comments: Links to this post

In any kind of Faith Development model such as Peck's there are important points to keep in mind. Tomlinson highlights them.
Stages are only milestones and there are many variations to be found between and beyond.
We all regress in certain circumstances.
The stages are a description and there is no right of wrong.
Moving does not correlate with levels of intelligence.
I found myself in a conversation once with someone who told me I was finding my faith and not losing it, I'm glad I had that conversation! An understanding of my personal growth has helped me understand that as soon as you think you have the answers, new questions and new doors open that's the beauty of faith.
Posted by Gordon at 1:33 PM No comments: Links to this post

Tomlinson points out that Peck's model of stages is an oversimplification and the reality is to be found  between and betixt! But Tomlinson's reworking is helpful for those trying to make sense of faith as an independent choice outside of previous conformity.
Stage 1 - Self-obsessed. This is the normal state of most children, but 20% of adult still demonstrate the same characteristics. Any shift from stage 1 to stage 2 often appears sudden and dramatic and is consistent, but not exclusively, with religious conversion.
Stage 2 - Conformist. This stage is consistent with most believers and churchgoers. There is a sense of tribalism and defensiveness to the form of their religion. This stage is characterised by uncritical acceptance. Concepts of God are like a 'benevolent cop in the sky' that is consistent with the kind of God that they need. A God that ensures good things to happen in accordance with their loyalty.
Stage 3 - Individualist. Ironically stage 3 people often are non-believers but are generally more spiritually developed than many who are content to remain in stage 2. This stage is characterised by scepticism and is shaped by doubts and questioning. Any acceptance of cliches and platitudes crumbles.
Stage 4 - Integrated.  Tomlinson's categorisation here connects with a coming together that has understanding of an intuitive sense of wholeness, or that of being part of something bigger, a knowing within unknowing! Peck calls this mystic-communal and identifies with an acceptance of what can not be fully grasped but yet is sought after!
Posted by Gordon at 1:25 PM 1 comment: Links to this post

I found a screwed up piece of paper in the bottom of my ruck sack with some notes I had made while reading Dave Tomlinson's The Post Evangelical (incidentally a great read for anyone for whom faith has started to less of what it has always been and more of something you are less sure of!)
Anyway - Scott Peck a psychologist noticed something ....
"Religious people who came to him in pain and trouble frequently left the therapeutic process as atheists, agnostics or at least sceptics. On the other hand, atheists, agnostics and sceptics often left therapy as deeply religious people. Same therapy, same therapist and each of the cases successful in their own terms, and yet with utterly different outcomes from a religious perspective."
He identified that both scenarios in one way or another were connected to the different stages of personal development, which Is common to us all and what he observed was a shift reflecting what he saw as a faith  more an expression of conformity than a fully independent choice.  Pp47ff
Posted by Gordon at 8:50 AM No comments: Links to this post

Ongoing reflections on Warren, R (2004) The Healthy Churches' Handbook and its 7 marks of health
The second mark of health that Robert Warren looks at is that of having a preoccupation outside of itself, what he calls a 'whole life focus' rather than a 'church life' concern. This is all about being a church that is centrifugal and missional in its identity - outward in its expression of love to its community. 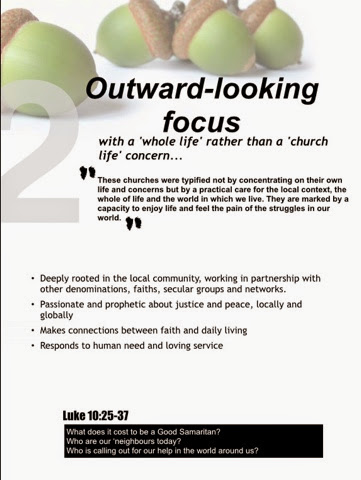 A church with an outward-looking focus is all about being church that in all things shares the pain and joy of community. Not only being concerned with 'who' is your neighbour but 'how' is your neighbour. (Hat tip to liveability :o)) This means being conversant and in relationship with our locality and in many ways being the kind of church that is known and would be missed if it wasn't there.
The danger being of course that preoccupation with self is never far away!
Posted by Gordon at 8:17 AM No comments: Links to this post