I started reading Resourcing Mission after the first ever UK political leaders’ debate on TV. Liberal Democrat Nick Clegg won on charisma and charm but apparently Gordon Brown had it on substance. Mission books lend themselves nicely to charisma and charm but what really is needed is substance. This book is not a feel good book on mission full of resources, video clips and exciting stories of working with the mafia, but it is a book of guidance for individual’s, leadership teams, congregations wanting to develop a framework through which to reflect on mission.

Two main premises hold the book together and give it momentum.
The first, recognising that local church can struggle to make sense of it's place within the role of mission, is that of 'doing theology'. The book offers the pastoral cycle as a tool for the theological reflection that is essential for any church wanting to live out it's essence in it's locality. The second recognises that the church is inextricably linked to its culture. To act like an ostrich with its head in the sand is not being the church. Church in mission needs to reflect, know itself and acknowledge what it presents as cultural signs. This book offers five cultural forms that the church presents as it helps focus upon examples on ‘missiological intention’.

The first two chapters in themselves are worth every penny for anyone wanting to apply the theory of mission to their context. The rest of the book helps those wishing to reflect on different aspects of church life and how they relate to mission. This book joins the dots with credibility and is a must buy for anyone frustrated with church not taking its missiological place.

If you want stories of church breaking drug cartels, rescuing trafficked women while growing your own veg this book isn't for you. However, if you are wanting to build a momentum of outward love into your community and you want to do it with sustained credibility - buy it.
Posted by Gordon at 4:06 PM No comments: Links to this post

Email ThisBlogThis!Share to TwitterShare to FacebookShare to Pinterest
Labels: reading It wasn't quite the answer to prayer I was hoping for. As I cycled down to Southwark with my guitar on my back, dodging the puddles I prayed to see something of God's beauty.

I saw the obvious, the tulips, hanging droplets of waters from pink blossom, the smile of a baby being pushed to church. But it wasn't until I was locking my bike that I saw it. Bedraggled, sodden, pale and bleary eyed was a young man who looked middle aged, bent over he was being extremely and violently ill. That in itself was not the beauty.

The beauty came in a community that is Southwark Corps embracing and caring for a homeless guy that can not stop being sick, but yet the hospital discharged him saying there was nothing that could be done. As I left a team of people were still caring and I could hear his thick Eastern Europe accent as he repeatedly said thank you.
Posted by Gordon at 12:22 PM No comments: Links to this post

Email ThisBlogThis!Share to TwitterShare to FacebookShare to Pinterest
Labels: Mission

Some of Daniel Bonnell's images are stunning. This is the Road to Emmaus.
Posted by Gordon at 9:19 PM No comments: Links to this post

Email ThisBlogThis!Share to TwitterShare to FacebookShare to Pinterest
Labels: art that speaks

"There is the very real problem that cracks are papered over by the latest top ten worship songs while hyped induced resolutions are not sturdy enough to be sustained in the long term. "
"I'm looking forward to some real worship..." is an interesting but common expression that I hear from time to time. It is usually within the context of unfulfilled expectations of what worship should be within college, usually stoked by, ironically a self interested approach to worship. It comes usually twinned with "I thought I would feel closer to God here..." I wonder how much this may have to do with a Spiritual Formation whose foundation is mere feeling.

The mountain top experience that is sought in spiritual formation through what Wilhoit calls the Conference Model hides what he sees as two potential problems. There is the very real problem that cracks are papered over by the latest top ten worship songs while hyped induced resolutions are not sturdy enough to be sustained in the long term. Wilhoit points out that while useful the conference should not be seen as indispensable spiritual filling stations. The conference model of spiritual formation exists as a false model if it seen as a 'primary source of nurture and guidance on the journey'.

While highly attractive, the conference model rarely helps engagement with where there is shift from a consumer mindset in worship to an understanding of worship as giving away of preference.

Wilhoit, J.C (2008:51ff) Spiritual Formation as if the Church Mattered. Baker
Posted by Gordon at 10:07 PM No comments: Links to this post 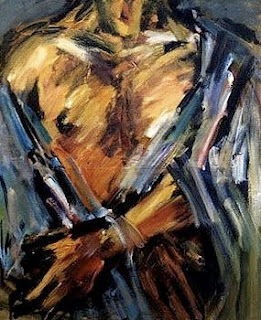 I've just been recommended Ghislaine Howard's art, particularly her Stations of the Cross
Posted by Gordon at 6:58 AM No comments: Links to this post

Email ThisBlogThis!Share to TwitterShare to FacebookShare to Pinterest
Labels: art that speaks

Buechner's Knowing Doing and Being...

I found resonance in Buechner's reflection, I like the idea of getting to a place where our doing, knowing rather than exclusive to each other informs and shapes each other in the way Buechner describes.

I wanted to learn about Christ - about the Old Testament, which had been his bible, and the New Testament, which was the Bible about him; about the history of the church, which had been founded on the faith that through him God had not only revealed his innermost nature and his purpose for the world, but had released into the world a fierce power to draw people into that nature and adapt them to that purpose, the church that not even the assorted barbarities and blunders of it's ragged two thousand years had ever quite managed finally to discredit or destroy; about the theological systems that the passion of his original followers, and of Saint Paul in particular , had been distilled into.
[having been] moved to astonished tears which came from so deep inside me that to this day I have never fathomed them. I wanted to learn more about the source of those tears and the object of that astonishment. I wanted to know, and be known by, people who knew greatly more about Christ than I did.
Maybe above everything, I wanted to do something for him.

Posted by Gordon at 10:35 AM No comments: Links to this post

Email ThisBlogThis!Share to TwitterShare to FacebookShare to Pinterest
Labels: Buechner 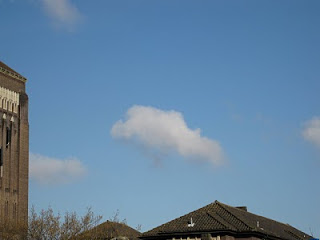 I have to admit to this Icelandic volcanic ash getting right on my nerves!
Posted by Gordon at 8:57 PM No comments: Links to this post 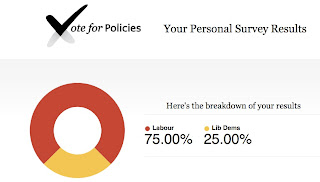 Apparently there is going to be a General Election. Vote For Policies is a interesting site - my result is a relief, I was worried I was going to be outed as a Green!

My results are here
Posted by Gordon at 3:10 PM 2 comments: Links to this post

I got a glimpse of an Easter card that Eryn made this year. The inside
text read -

That's one way of skipping through the passion!

Sent from my iPod

Posted by Gordon at 9:08 PM No comments: Links to this post

the sacrament of 'for you..' 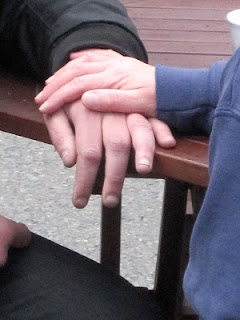 I found it hard to look into the face of Simon Peter, not one of the star roles in the drama of the Easter weekend, but one of the guys at Faith House who has started to find his identity as part of the family, not least in that he is outrageously good at domino's!

I found it hard because his face was a mosaic of dried blood, stitches and fresh bruises. I found it hard because words failed me. As we came together to share as a community of hope, I didn't know what to say. He didn't know what to say. Christine who has known Simon for longer took over knew what to do. Christine sat and became hope for Simon Peter as he drank his tea. I saw resurrection hope in this touch.

Today, Easter Sunday was special. Whether it was where we started, in HMP Holloway or where it finished outside Faith House at the Street Party, hope was tangible. Tangible not in the singing of Easter hymns, the giving of daffodils or Easter eggs, but in the many ways we were in our very being resurrection hope, simply through the sacrament of 'for you...'
Posted by Gordon at 10:17 AM 2 comments: Links to this post 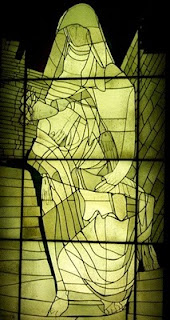 Posted by Gordon at 10:10 PM No comments: Links to this post 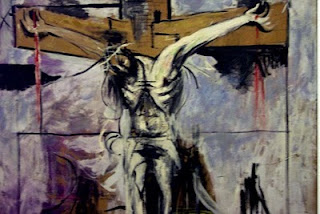 A Good Friday moment came late when watcing Being Human.

"Humanity is about love, and sacrifice. This doesn't rob me of my humanity, it proves it.."

Being Human episode 6
Posted by Gordon at 11:30 PM No comments: Links to this post One of the benefits of college apart from a librarian who can predict what you want to read better than Amazon, is that there is the best collection of DVD box sets and films to borrow.

OK - Being Human is slightly strange as far as BBC Dramas go, but nevertheless the first series is compelling as it explores what it is to be truly human. Funny, ridiculous, yet in places the thoughts behind the script pulls you up short. In places strangely familiar.
"It's when you've worked out who you are that you can really start to live..."

"Where do I belong? Where do I fit? Who are my people? Where do my loyalties lie? We all choose our tribe. It's that need to belong, to live within boundaries, cause it's scary on the outside, on the fringes. Some labels are forced on us. They mock us, set us apart 'til we're like ghosts, drifting through other people's lives. But only if we let the labels hold. You can p... your whole life away trying out who you might be. It's when you've worked out who you are that you can really start to live."

Seems to me that Jesus modelled what it is to really start to live; seems to me that the key to living fully is knowing who you are, abundant life flows from knowing to whom you belong - anything else - mocks fullness of life.
Posted by Gordon at 9:18 PM 1 comment: Links to this post