I've enjoyed Alan Jamieson's Chrysalis - a good analysis of what it is to move from a pre-critical expression of faith, through a desert, darknight faith existence, into post-critical faith.

Jamieson, A. (2008). Chrysalis: The Hidden Transformation in the Journey of Faith. Carlisle: Paternoster.
Posted by Gordon at 6:27 PM 2 comments: Links to this post

This month has been good.

As a family we have been to the Ballet to see Sleeping Beauty and last week we got to see Joseph. I was astounded that the girls sat riveted through three hours of the Royal Ballet, my attention divided as we watched the mind blowing skill, strength and grace of the Rose Adagio; divided as I was uncertain what was more beautiful, the ballerina's steadiness or Eryn's intake of the beauty.

Joseph was a great experience for us as well; a great production, dreamlike, bizarre enough to keep a smile on your face throughout and on the bus on the way home. I still have a smile on my face four days later - because it was bizarre enough to fox Bethan's growing sense of theology.

We spent yesterday on a day's retreat with staff of WBC. St Katharine's Foundation was like meeting up with an old friend; I used to meet up with a contextual theology group once every couple of months and fell in love with this simple and open setting a stones throw from the bustle of Canary Wharf. It's beauty goes beyond what is inside and outside of the facilities but rests on the deep heritage of a community initiated in 1147 by Queen Matilda.

If I had a favourite place - it is up there!

A good chunk time was set aside for reflection in the afternoon and I found a copy of Cloud of Unknowing in the library and found it's emphasis of traveling into self, through self and then beyond self something interesting to think through!

I jotted this quote down and put it in my pocket; it is currently spinning around in the washing machine - but googled the gist of it and found the quote elsewhere.

Posted by Gordon at 8:48 PM No comments: Links to this post

Some helpful articles here from the likes of NT Wright, Elaine Storkey and more here

"I see the launch of Fulcrum as a call to evangelical Anglicans of whatever background to work together, to play a full part in the Church of England and the wider Anglican Communion, to make the running, instead of always reacting, to be in the front row of innovative Gospel-work."
Tom Wright, Bishop of Durham, Fulcrum National Launch
Posted by Gordon at 9:04 PM No comments: Links to this post 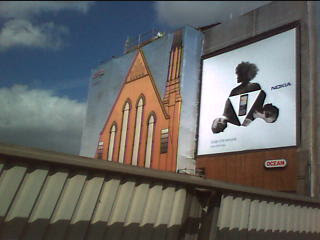 I took a picture of a church last week encased in scaffolding its beauty hidden completely covered by plastic with a print of a church on it. It is just off the A4 on the way out of London; not easy to stop and take the shot - this was taken with my phone hanging out of the window as we shot by at 50mph! (obviously I wasn't driving!).

I suppose the point is that the church didn't want to lose its sense of presence during exterior works. It got me thinking about the facade of church that is seen and rejected by so many.

Ask people what they see of church and what they generally see is self obsession and inaction; a gospel that is merely words to ascent to and not the alternative way of life and of being that Jesus spelled out; any sense of hope destroyed by an impression of a cosmetic one dimensional community bothered exclusively about its self serving needs. Church defined by the songs it sings!

There are those (Mat) in the past who have made a helpful connection with the position the church in general finds itself through the metaphor of exile. While all that was exilic was not necesarily bad, it for me remains helpful. Michael Frost (2006) in Exiles: Living Missionally in a Post-Christian Culture uses the metaphor in a different way and sets the scene through a Bruggemann quote.

The danger in exile is to become so preoccupied with self that one cannot step outside oneself to rethink, reimagine and redescribe larger reality. Bruggemann Cadences of Home: Preaching Among Exiles

I guess whatever angle you come at it from - there comes a time to move out from behind the facade, if it is for you a facade and let the reign of God be seen!
Posted by Gordon at 7:12 PM No comments: Links to this post

Posted by Gordon at 1:00 PM No comments: Links to this post

promises for the Journey...


This week it was my turn to put Koinonia (our weekly community gathering for prayer) together. I threw a bit of Isaiah; quotes found in Chrysalis, a Nicholas Mynheer image and a youtube video together hopefully to communicate something of Faith Development - I guess you had to be there!!

When you pass through the waters, I will be with you;
and through the rivers, they shall not overwhelm you;
when you walk through fire you shall not be burned,
and the flame shall not consume you.

Isaiah 43:2
“The days are just beginning. Before you emerge into the light again you will be stripped to the core. You will rage and scream at God. You will retreat into a cocoon of sorrow and breathe in slow motion. The colour will drain from the sky, the meaning from life. As a plough tears through hard earth, your heart will be broken up. You will make friends with pain, nursing it as the child of grief utter emptiness fills the earth, and the valley appears to contain nothing but the echo of your own cry. Surely God has left you. The road which seemed to be leading somewhere has become a dead end. A mocking maze with no exit. Then one morning in the distant future, you wake and hear a bird singing ….”

I will give you the treasures of darkness
and riches hidden in secret places,
so that you may know that it is I, the Lord,
the God of Israel, who call you by your name.

The desire for enlightenment..

His disappointment was almost palpable as I said "Look I'm not trying to evangelise you but ... I found it in the life and purpose of Jesus and in the hope that is mine through that life..."
As I waited for the bus to make my journey to Faith House I thought of Dan. I hoped he would be there. I met Dan for the first time at Faith House last week and had quite a conversation.

It started when Dan asked me if I was a Christian and then proceeded to tell me that he had never met a Christian who was enlightened. I have to admit that the next hour and a half was heavy stuff! He explains his concept of entering the 'gap'; of techniques, methods of meditation; his desire to achieve this enlightenment. "Dan if you are talking about fulfillment, peace, purpose I've found it..."

His disappointment was almost palpable as I said "Look I'm not trying to evangelise you but ... I found it in the life and purpose of Jesus and in the hope that is mine through that life and discovering my own purpose..."

"Of course the trouble is that I can't accept that Jesus was God..." we talked as Dan unpacked his thoughts for me which concluded with Dan suggesting that Jesus was neither human. Out come my two friends Josephus and Tacitus, seemingly unimpressed Dan continues."don't get me wrong of course I accept the historical evidence of the existence of Jesus..."

"You've just said you could accept either Jesus as Human or God, Dan I'm confused..."

Dan wasn't at Faith house this week - who knows about next week.
Posted by Gordon at 6:09 PM 1 comment: Links to this post

Looking through my drafts I came across a couple of links that I forgot to post for future reference.

Nathan Perry - Faith Development, Postmodernity and Church - New Zealand and Beyond
Posted by Gordon at 10:01 AM 2 comments: Links to this post

Art that speaks to me - Isaac Newton (William Blake)

Spent some quality time with a friend last week at Tate Britain. It was good to let the art direct our conversation.

The William Blake exhibition was worth a look . His picture of Isaac Newton and the associated inscription however caused me an element of concern - apart from the fact that I hope that rock was warmed up before he sat down; he might've been a clever bloke but he really should have listened to what his mum had to say about piles!!

While clever William Blake has Newton missing out on the infinity of the endless circle. His inscription reads:

Definitely something to be careful off - just to underline this for me, a daily meditation was waiting in my inbox from henrinouwen.org

We have to keep looking both ways to remain humble and confident, humorous and serious, playful and responsible. Yes, the human person is very small and very tall. It is the tension between the two that keeps us spiritually awake."

Posted by Gordon at 12:59 PM No comments: Links to this post

Email ThisBlogThis!Share to TwitterShare to FacebookShare to Pinterest
Labels: art that speaks, faith

Email ThisBlogThis!Share to TwitterShare to FacebookShare to Pinterest
Labels: Mission 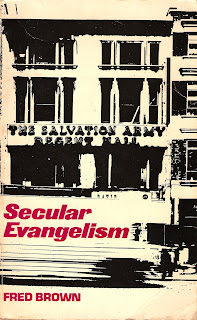 Major Fred Brown narrates the story and the lessons he learned through this period of his ministry in the controversial book Secular Evangelism. The book and Fred Brown's consequent resignation hit the popular press and even an article in Time (here). History aside what is contained within this book shows that Fred Brown was 30 years ahead of his time. Before any debate of belonging before believing; before any discussion of the importance of 'being' rather than 'doing'; before any critique of institutional church; before any concept of engaging with transition through communitas, liminality or any other concept selling books today - Fred Brown covered it. Contextualisation of evangelism was what drove him and the project; to some the soft sell of evangelism, to others the irrepressible attraction of putting the world to rights. To whet your appetite...

"We should stop thinking of evangelism as a means of inflating our congregations. Since the days of which I am writing, a lot of troubled water has flowed under the bridge of evangelical debate, and now most of us are agreed that to treat people as pew fodder, and little else, is, considerations of effectiveness apart, a denial of everything central to Christianity....it represents nothing less than devout blasphemy, a spirit that has done more harm to the cause of Christ's kingdom than multitudes of non-churchgoers. It is devout because its sincere aim is to serve God and further his cause. But it is blasphemy because it uses God's name to manipulate and condition other people." pp29

Lost Voices of Mission...Catherine Hine
Posted by Gordon at 10:37 PM 12 comments: Links to this post