something in a human face... 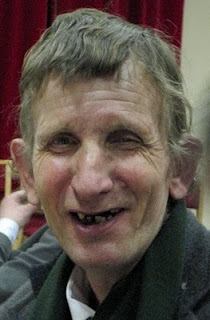 Frederick Buechner says "When you find something in a human face that calls out to you, not just for help but in some sense for yourself, how far do you go in answering that call...?" There was something in Bob's face last night at Faith House that called out to me. The Quality Street was being handed around and someone decided to take the lion's share to Bob this was simply unjust. Bob took action rescued the sweets and brought them to the safety of the kitchen and explained the injustice.

I wasn't too sure about how he took this as he walked of with a 'whatever' kind of shrug! But something in his face called out to me.

Paul Tillich apparently is quoted as saying "Here and there in the world and now and then in ourselves, is a New Creation". That deep desire for righteousness was to be found in Bob, I was left thinking how much a better place the world be for more of that!
Posted by Gordon at 3:03 PM