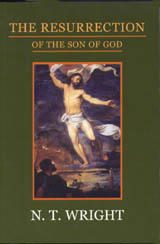 Since hearing NT Wright speak last year I've been intrigued at his suggestion that we are missing the point when it comes to our theology of heaven.

His claims that a theology based on 19c Hymn writing has shaped our understanding away from the text and closer to a form of Gnosticism (beyond the blue horizon there's a better place I know!) have certainly got me thinking hard. The questioning of a woman at that day's conference will remain with me. "Am I to say that I have spent the day with Bishop Tom, NT Wright only to come away to say there is no heaven?" ... "You can say what you want but make sure you base what you say on the text" A good evangelical answer! - base what you believe on the word!!

Is he saying there is no heaven? I'm not sure he is. I'm on a journey looking through the third in his trilogy "The Resurrection of the Son of God" to see what he is saying. Too be honest it so far has been a heck of read so I aim to summarise periodically.

Part One is about setting the scene, building up the context through which the early disciples' use of the language must be understood. His conclusion he suggests should not be particularly controversial. However those - he suggests - who have written and preached about Jesus' resurrection in isolation to the complete Jewish context will struggle. Our theology has been shaped by so many who have written and preached with scant attention to the complete Jewish context.

Spending time in Ezekiel 37, Isaiah 26 and onto Daniel 12, Maccabees 2 NT Wright is keen to point out how the metaphorical meaning of 'resurrection' that pointed to a hope and justice for a people of exile through a covenental God moved onto a literal understanding of re-embodiment by the time of Maccabees 2. This in turn was flavoured with Hellenistic, perhaps Platonic ideas of a continuing of the soul which gives way for the resurrection existing as a belief in a continuing post-mortem existence. (NT Wright 2003)

"However Abraham, Isaac and Jacob may have been in Jewish thought, nobody imagined they had been raised from the dead. However important Moses, David, Elijah and the prophets may have been, nobody claimed that they were alive again in the 'resurrection' sense. The martyrs were honoured, venerated even; but nobody said they had been raised from the dead. The world of Judaism had generated, from its rich scriptural origins, a rich variety of beliefs about what happened, and would happen, to the dead." (NT Wright 2003)

Some interesting points, Part Two looking at Early Christian understanding waits to be read. NT whets the appetite by referring to the 'new mutation that would spring up, like a totally unexpected plant, within the already well-stocked garden'.
Posted by Gordon at 7:52 PM

'However important Moses, David, Elijah and the prophets may have been, nobody claimed that they were alive again in the 'resurrection' sense.'


Did the Gospel writers claim that Moses had returned from the grave, walked the earth, never died again, and had ascended back into Heaven?

If that is not a resurrection, then what is it? (Clue. Wright never says)

Of course, Paul never mentions any such thing.

And the converts to Jesus-worship in Corinth scoffed at the idea that God would choose to raise a corpse.

Clearly they had not heard of Moses returning from the grave, and they had not been converted to Jesus-worship by tales of corpses rising.

Why had they converted to Jesus-worship?

You can scour Wright's books in vain for an answer as to why people would convert to Jesus-worship and scoff at the idea that God would choose to raise a corpse.

Paul, of course, praises them to the Heavens in 1 Corinthians 1.

But what happens to corpses, which people knew dissolved into dust?

Paul trashes the idea that resurrected beings will be made of the dust of the earth that corpses dissolve into.

Paul tells the Corinthians that earthly beings are as different from heavenly beings as a fish is from the moon.

Only an idiot thinks a fish turns into the moon.

Perhaps that is why Paul thought it idiotic to discuss how a corpse can turn into a resurrected being.