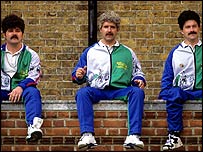 Those who remember the Manchester Passion on BBC might be interested in The Liverpool Nativity - press release here.

"Liverpool Nativity tells the story of the first Christmas through the music of Liverpool. The familiar songs will be performed by characters in the drama and a live orchestra with fresh musical arrangements."

I'm not sure if Harry Enfield has been part of the casting but I hope the three wise men are truly scouse!!

Email ThisBlogThis!Share to TwitterShare to FacebookShare to Pinterest
Labels: resources

Looks like Liverpool Walton Band are going to be featured in a small way:

You do realise that jokes about scouser and shell suits could be considered racism unless you actually come from Liverpool:)